Arroyo del Valle (“Arroyo”). A 36.4-mile, westward flowing creek that begins in Santa Clara County and flows into Alameda County where it is dammed to form Lake del Valle. The Arroyo continues downstream of the Lake del Valle and flows through the southern portion of the Eliot Mine.

California Environmental Quality Act (CEQA). California’s landmark environmental protection law that requires state and local agencies to identify the significant environmental impacts of their actions (including approval of private development proposals) and to avoid or mitigate those impacts, if feasible.

Chain of Lakes. A term used in the 1981 Specific Plan for Livermore-Amador Valley Quarry Area Reclamation to describe a master reclamation plan that requires mined areas to be shaped and converted into lakes for the purposes of water management, including water conveyance and groundwater recharge.

East Bay Regional Parks District (EBRPD). A public agency that manages a system of parkland and trails in Alameda and Contra Costa counties, comprised of over 114,000 acres, including more than 1,200 trails, spread over 65 parks. The EBRPD is responsible for acquiring, managing and preserving these resources.

Environmental Impact Report (EIR). A detailed report written by the lead agency describing and analyzing the significant environmental effects of a proposed project, identifying alternatives and discussing ways to reduce or avoid the possible environmental effects. The EIR process begins with the circulation of a Notice of Preparation (NOP) of a Draft EIR, which informs the public and government agencies that an EIR is being prepared for a project.  The Draft EIR is circulated for public and agency review.  Following this review period, the lead agency will prepare a response to comments / Final EIR.

Mean Sea Level (MSL). The height of the ground relative to the average sea level.

Reclamation Plan and Reclamation Plan Amendment. A document required by SMARA that establishes how mined land will be restored to a usable state that is beneficial to the public once mining is complete.

SMARA. California’s Surface Mining and Reclamation Act. Passed by the state of California in 1975, SMARA provides a comprehensive policy for the regulation of surface mining operations and establishes the process to restore the land to assure that adverse environmental impacts are minimized and mined lands are returned to a usable condition.

Specific Plan for Livermore – Amador Valley Quarry Area Reclamation Plan (LAVQAR).Adopted by the Alameda County Board of Supervisors in November 1981, it is a component of the Alameda County General Plan and serves as the master reclamation plan that would shape mined pit areas into a “Chain of Lakes” and return the remaining mined lands to productive uses after the removal of sand and gravel reserves.

Lake and Streambed Alteration Agreement (SAA). A California Department of Fish and Wildlife approval (in the form of an agreement between CDFW and a project proponent) required for a proposed activity that may substantially modify a stream or lake. An SAA includes reasonable conditions necessary to protect resources and must comply with the California Environmental Quality Act (CEQA).

Surface Mining Permit (SMP). The permit that allows mining to be conducted in accordance with an approved reclamation plan. A reclamation plan is a form of land use entitlement that sets forth a plan for returning the land to a usable condition, which is readily adaptable for alternate land use. 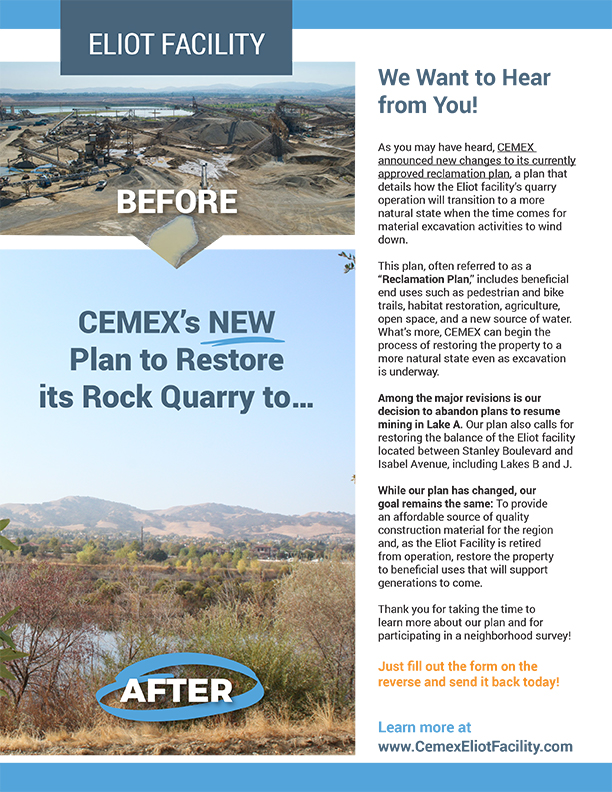